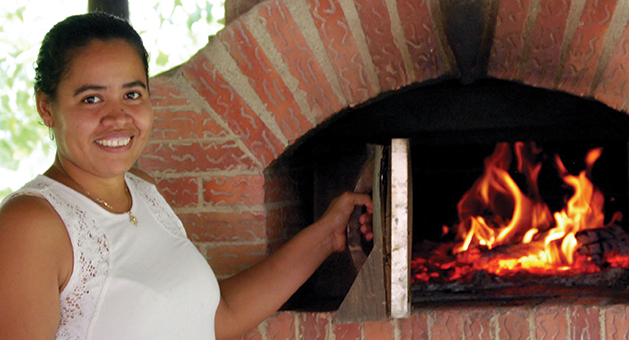 From the moment I walked into the Alvarado house, I felt welcomed. The smell of percolating coffee on the counter, pictures of smiling faces covering the walls—I felt like I was walking into an old friend’s house, not someone I hadn’t yet met. And then Nancy Alvarado offered me a piece of crusty homemade bread with butter and locally harvested honey. I took a bite (it was delicious) and we started chatting. Like old friends.

So that I could fully understand Bricks to Bread, the nonprofit Alvarado founded, we started at the beginning, in the early 1990s.

“I decided I could do one of three things,” Alvarado remembers. “I could have a big job, go to grad school or join the Peace Corps.” She decided on the latter and was sent to a remote village in Costa Rica—so remote that she relied on a horse for transportation.

During her stay, which lasted more than two years, she started a kindergarten class, led a youth group and empowered women to help support their families and follow their dreams. She also helped local farmers with farm management issues.

While in Costa Rica, she met Chato Alvarado, a police investigator and professional soccer player. They became friends and eventually started dating. Chato moved to the U.S. shortly after Nancy returned to Minnesota. The two married and bought a house in St. Louis Park.

“We were only supposed to be here [in St. Louis Park] for five years. But two kids, one dog and 23 years later … here we are,” she laughs. “This is the most welcoming community. Chato loves it. This is his place.”

Upon moving here, her husband got involved in the soccer community. A veteran of the Minnesota Thunder, he now coaches for St. Louis Park High School and works with the Minnesota Youth Soccer Association.

However, the couple remains closely connected to their Costa Rican friends and family and visits often. It was on one of those visits that Alvarado had an idea that stemmed from her days in the Peace Corps empowering women. “Through the years, I stayed in touch with one family: Cristina [Pérez] and her adult daughter, Laura,” she says. “They were smart and talented and funny, and yet they had nothing.” Except, she tells me, they were amazing cooks. “I laughed and said, ‘Would you want to earn money baking?’ ”

As fate would have it, that same weekend one of Alvarado’s friends in Minnesota signed up for a how-to class. The subject: Building a brick oven.

Between a garage sale, online fundraising and a garden party, Alvarado raised enough money to build the first brick oven. She returned to the Costa Rican village where she spent two years as a volunteer, but this time, she didn’t go alone. Neighbors and friends wanted to be a part of this movement, so the Alvarados and several local families embarked on a life-changing service trip.

The group worked with the Pérezes, installing the oven in their yard and paving the way for a sustainable lifestyle. It’s been four years since that trip, and the Pérezes are still baking—and thriving. Using the app WhatsApp, we had the chance to chat with Laura Pérez.

More recently, Alvarado and her friends built another brick oven—this one, in the Alvarados’ yard right here in St. Louis Park.

Pérez says tourist groups visit her house as a form of cultural exchange. “We teach about the project and then bake bread together,” she says. “Afterwards, we share bread and coffee.”

Loaves of Love: A Mission to Change 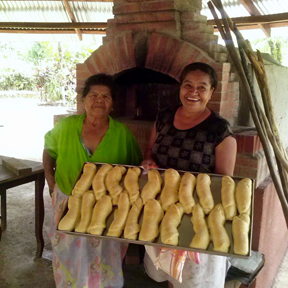